Appreciation for The John Merck Fund 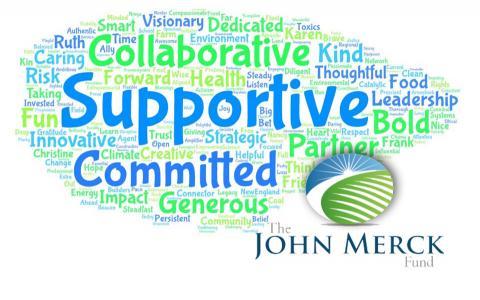 There’s an expression in sports that “you don’t want to leave anything on the field” - as in, don’t hold back - give it your all. While this may not apply to farming, as soils incorporate ungleaned crops as nutrients and leaving some fields fallow is a good farming practice, it has proven to be a laudable approach by The John Merck Fund (JMF), a valued funding and thinking partner of FINE since our inception.

JMF announced in 2011 that it would spendout all of its resources by 2021 in order to maximize its impact. During the past decade they have strategically invested in organizations around New England and beyond who were working to create meaningful change in four program areas of deep concern to the board. One of those programs, Regional Food Systems, has included efforts to channel demand from our region’s largest food purchasers such as schools, colleges and universities, and hospitals to increase the economic success of sustainable agriculture.

FINE’s origin story has very close ties to JMF’s first forays into regional food systems. In early 2011, Kathleen Merigan, then USDA deputy secretary came to New England to announce a grant to FINE to create a cross-sector six-state farm to institution network in New England.  She used the occasion to challenge a group of New England funders to match the USDA’s investment and support this nascent and ambitious initiative. Christine James, the relatively new JMF project officer heard the call and pitched FINE to the board, which stepped forward with a sizable initial grant. JMF was FINE's first foundation funder and has been our largest single contributor over the past decade.

Beyond providing resources to FINE, JMF has been a strategic thinking partner and connector since the outset. Board members have attended FINE events, and individually reached out with suggestions, questions and supportive comments - which means much more than any of them know, I’m sure! All members of the staff have always been incredibly responsive and helpful. And Christine James, now the JMF Executive Director, has connected us with other funders and food system partners, and been a huge champion of our cause. She has been an active and engaging presence at many planning meetings, retreats, events, and has always been willing to offer support -- and to challenge us to dig deeper, hone our strategy, broaden our network, and thus expand our impact.

At the recent JMF Sunset Celebration, close to 100 organizational leaders came together to share stories from our connection to the foundation. The goal of the evening was not to generate accolades for themselves - but rather to celebrate our collective work, and moreover to look ahead and ask what gives us promise in these trying times. The responses were as varied as they were profound; however all included the benefit of JMF fostered relationships and networks that have provided resiliency, collaboration, and creativity to meet challenges ahead. Gary Cohen from Health Care Without Harm nicely summed up the sentiment, saying, "JMF has been such a force in weaving together a powerful ecosystem of changemakers in our country. You have helped build a movement that is like a great tributary feeding into a much broader movement for planetary survival."

So with gratitude and renewed commitment to this movement, thank you to The John Merck Fund board and staff. You left nothing on the field, except an energized, connected and supported network of change makers.