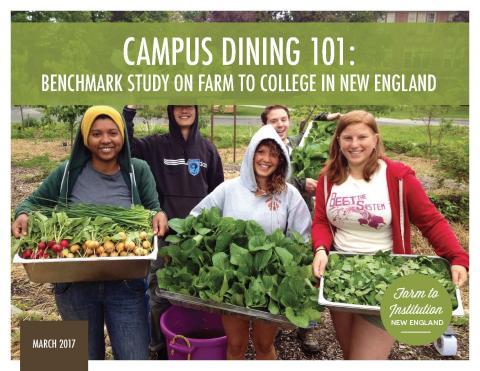 Campus Dining 101: A Benchmark Study on Farm to College in New England

Farm to Institution New England is pleased to announce a report that highlights the data collected from college dining operators in the region. This is the second report in our new series designed to help food system stakeholders understand the impact of institutional markets on New England's food system.

“Campus Dining 101: A Benchmark Study on Farm to College in New England” presents in-depth findings and makes specific, data-based recommendations for institutions of higher education as well as government officials, funders, and institutions.

Half of all institutions of higher education in New England that offer dining services responded to the survey. Public universities, private colleges, community colleges, and others are represented in the findings. Together, these colleges and universities serve over 65 million meals per year.

When asked about the primary operating structure of their college/university dining services, 27% of respondents reported that they manage their own dining services (self-operated). The remaining 73% said they were operated by food service management companies, with 34% using Sodexo, 21% using Chartwells, and 18% using other companies.

Amount Spent on Local Food in Each State

Although the size of the food budget does not influence the share spent on local food, there was a statistically significant difference in the percent of budget used for local food at colleges and universities that operate their own dining services and those operated by food service management companies (FSMC). This translated into 21 self-operated colleges purchasing more than half (55%) of the $57 million spent on local food in the region over the last fiscal year, whereas the 67 colleges run by FSMCs accounted for only 45% of this total.

Respondents were asked to rank their top products based on the value of the product. Local apples, milk, produce, and potatoes were included in the list of top five local food products purchased by reporting colleges and universities. The specificity of products listed by respondents varied. For instance, some colleges listed “produce” in their top five products, while others listed specific types of produce (e.g., apples, tomatoes).

The report is based on an original survey answered by more than 100 colleges and universities across New England in the spring of 2015. The survey was designed to:

This series of research reports is designed to inform key decision-makers in the public, private, and nonprofit sectors about how they can help move regional farm to institution work forward. In 2016, we published our first in-depth research report, "Getting It There: Understanding the Role of New England Food Distributors in Providing Local Food to Institutions." Later this year we will publish "Agricultural Producers & Farm to Institution Sales," reporting findings from approximately 225 New England farmers.

The purpose of FINE's metrics project is to measure the impact of the farm to institution sector across the marketing chain. The project covers all facets of the supply chain, from production to distribution and consumption, with a focus on three institutional sectors: schools, colleges, and hospitals.

You can read the farm to college report right here: