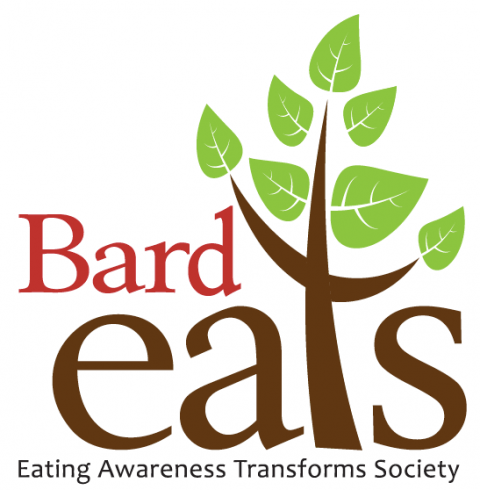 Bard College is a liberal arts institution located in rural Hudson Valley closely accessible to farmland and local markets. In March 2013, the college’s President, Leon Botstein, signed the Real Food Challenge Commitment as part of Bard’s pledge to become carbon neutral by 2035. The Real Food Commitment promised to increase Bard’s percentage of food spending on “real food,” as defined by the Real Food Challenge, to 20% real food by 2020.

In 2013, students and faculty created the Bard EATS Council to support local farms and sustainable products, increase food purchasing transparency, reduce waste and decrease the college’s overall carbon footprint. Bard EATS is a multifaceted organization comprised of leadership from the Bard Farm, Bard Dining, the Environmental and Urban Studies Department, the Office of the Vice President, the Office of Sustainability and, as of September 2015, Bard Student Government Representatives.

Bard EATS, at the time called the Bard Food Initiative, began cataloging Bard’s purchasing using the Real Food Calculator tool. Under the oversight of student leadership, Chartwell’s Sustainability Advocates and the concerted efforts of Bard EATS, Bard reached this goal five years early with an average of 24% “real food” purchasing recording in Spring 2015. Bard is now in the process of developing a plan to keep increasing spending on ecologically sound, local, fair and nutritious food over the next five years.

Bard College’s commitment to purchasing sustainable food and supporting the local economy began in 2008 when our dining services formed a relationship with Old Saw Mill Farms, bringing local Hudson Valley stone fruits, produce, and proteins to campus. In 2009, Bard introduced Hudson Valley Fresh (a cooperative dairy dedicated to keeping farmers on their land) dairy products and removed trays from the dining hall to save water, food waste and energy. From 2009 to 2010, local produce purchases increased by 30%. In 2010, Dining Services introduced 100% compostable disposable wares and added locally produced juices and ciders to Green Onion Grocer, our campus store. Also in 2010, the Bard Community Garden expanded to hire John Paul Sliva who would go on to become director of the Bard Farm.

In 2012, the college’s president Leon Botstein agreed to donate $40,000 dollars from the school’s funds to create a farm on campus if students could raise $25,000 for the project in three weeks. Carter Vanderbilt ‘15 organized a Kickstarter campaign to fund the Bard Farm and the goal was successfully reached. Later that year the 1.25 acre Bard Farm broke ground under the leadership of Paul Marienthal, Farm Director, and John Paul Sliva, Farm Coordinator. The first year yielded 6045.5 pounds of local, fresh, organically grown veggies that were served to the Bard Community.

In addition to valuing local, sustainable food Bard EATS has worked to improve the quality and variety of food served. In 2011, we launched the gluten-free awareness program and spent over $150,000 on locally produced products. In 2013, Dining Services switches all oil (except for frying oil) to grapeseed oil, which has zero trans-fats and is non-GMO. In 2011, we launched our first annual Food Day hosting a farmer’s market, farm tours, and educational panels.

In March 2013, President Leon Botstein signed the Real Food Challenge Commitment, pledging to dedicate 20% of purchasing to "real food" (food that is local/community-based, fair, ecologically sound, or humane as defined by the Real Food Challenge criteria) by 2020. Bard began with a baseline value of 5% and in August of 2013 began using the Real Food Calculator to record monthly changes in Bard “real food” percentage. Dining Services hired a Sustainable Food Advocate to oversee the project, manage student labor and reach out to local farms and distributors. In Spring 2015, Bard reached an average of 21% purchasing of Real Food, beating the goal five years early.

FUTURE OF FOOD at BARD

Rather than continue calculating monthly spending values with the Real Food Challenge, Dining Services and Bard EATS has decided to create its own rubric of criteria for “real food” that is more specialized to the needs of the institution and its relationship with local farms.

The Bard Farm is a 1.25 acre farm located on campus. The farm is operated by student labor and sells its yields directly to Bard Dining Services. During the 2015 growing season, over 21,000 pounds of fresh produce was purchased.

A main challenge of the Bard EATS initiative has been securing consistent involvement from the general study body about the progress being made with Bard’s food. Bard EATS and Bard Dining Services have also struggled with hitting a spending plateau as well as outgrowing the Real Food Challenge rubric.

Bard College has three dining locations and one grocer on campus, all operated by Chartwells Dining Services.

In the process of implementing the college’s sustainable food initiatives, Bard EATS has learned that having a large food budget is necessary to achieving sustainability goals many of the local and sustainable food choices cost significantly more. Furthermore, while these initiatives are good for the community, they cannot necessary be correlated into overall customer satisfaction.